Crikey ! Thought I'd seen everything in my many years reffing but first time for everything.
I did a game from the weekend, quite a low level. But a private sports ground (not a public park) hence would have expected better grounds-keeping.
We were on a different pitch to usual for some reason - which had a few of oak trees which were quite a way away from the touchline but, had substantial branches reaching over the pitch. Didnt even notice it or think about it in my pre-match pitch walk-around.
Law of sod applies as a PK is taken to kick for touch, ball travels high and is clearly heading over the touchline when it hits the branch and bounces back into the field of play. The non-kicking team immediately start playing on and counter-attacking.
I blow the whistle and ( dimly remembering the "... or the ball touches anything beyond the touchline" clause), declare that that is "in touch" and the lineout taken in line with where it hit the tree branch.
Was I wrong ? Should I have allowed them to play on ?

sounds right to me.

the home team would normally have a solution to this theyd warn you about (and the oppo). it cant have been the oinly time its ever happened.

of course could be it was the home team that caught it and attacked , being cute with the "local ruling" toi see how it would favour them...
O

Thanks OB. So how does one restart ?
B

CrouchTPEngage said:
Thanks OB. So how does one restart ?
Click to expand...

Has happened to me twice in my playing career. Chip kicked the opposition winger and caught the ball and was clear to score but unfortunately it clipped an overhanging tree. Scrum down, attacking ball. Can’t be anything else can it?

Branches overhang the Ellingham & Ringwood 2nd pitch by c 5m. Ball always deemed to be out of play when it hits them, going back seasons and seasons.

Then had it occur on a school's pitch this season. Again just metres from touch. The kick was going out of play before it hit the branches, so we'll take a throw in, as if it had gone out.

Would re-consider if it was a kick from close to touch going towards the middle of the FoP. Scrum to kicking team probably equitable (until they do it for the 4th time!).

CrouchTPEngage said:
Thanks OB. So how does one restart ?
Click to expand...

OB.. said:
[LAWS]19.1 (end) The team that was last moving forward or, if neither team was moving forward, the attacking team.[/LAWS]
Click to expand...

Many thanks. Happy now.
Learning point for me : Pre-match walk-around needs to include me looking up as well as down

CrouchTPEngage said:
Many thanks. Happy now.
Learning point for me : Pre-match walk-around needs to include me looking up as well as down
Click to expand...

... and maybe confirming with the home ref liasion / skipper/ coach / waterboy / passing dog walker if there are any local "gotchas" and "rules".

Although Law 6 says a scrum, I don't think that Law 19.1 really covers it as the last entry is for when "he referee awards a scrum for any other reason not covered in law". But this a reason that IS covered in Law. So I think it's a gap in the laws.


going back to the OP - in this specific scenario

Law of sod applies as a PK is taken to kick for touch, ball travels high and is clearly heading over the touchline when it hits the branch and bounces back into the field of play.
Click to expand...

I actually think that a lineout is the better decision.

I guess IF a spectator ran to the touchline and touched the ball as it passed them whilst it was in the feld of play youd award a lineout?
C

didds said:
I guess IF a spectator ran to the touchline and touched the ball as it passed them whilst it was in the feld of play youd award a lineout?
Click to expand...

This 6.10 which is more explicit than 6.9.
If the ball carried on into touch 6.10 allows you to ignore the spectator and playon (lineout) . If the spectator prevented the ball going out then I think it has to be a scrum to the kicking team.. which is a bit rubbish seeing as it would have been a lineout to the other team
O

As a player many years ago, there was one club famous for its overhanging trees. They were by a stream, so the club always brought out a net to recover balls from the water.

On one occasion we had a further problem - no referee, and no spare players. There was a lone spectator who was apparently a regular, so their captain suggested asking him to referee.

It quickly became apparent that he had no real idea of the laws eg at a 22 drop out, he penalised his side for not being back 10 metres. By half time it had become farcical, so after a discussion, the two captains agreed to referee the game themselves by telling the "ref" when to blow and then announcing why. He seemed pleased with this, and it worked remarkably well, but I'm glad that was a game before leagues. 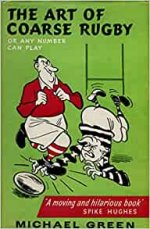 crossref said:
I actually think that a lineout is the better decision.

After all, Law 6 doesn't actually say it is a scrum - just that the ball becomes dead...
Click to expand...

F*ck me, I agree with Crossref.

We had a field like that in Norfolk Va. Ground rules applied, which was that if the ball hit the tree, lineout and law book be damned.

crossref said:
I actually think that a lineout is the better decision.
Click to expand...

are you thinking a lineout whenever the ball hits a branch or only if you think ball was headed into touch anyway?

What if its a general play box kick outside 22 that hits a branch?

I reckon I'd go with the scrum in all cases.
C

i think we have to apply a little common sense to 6.9.f

Surely no one would order a scrum in either case?

Luckily 6.9.f doesn't say 'scrum' it merely says that the ball is dead. So in both scenarios the correct decision IMO is to take the kick again.