Dore Moor in August = 30% chance of dying of hypothermia.

First 'normal' game was on Saturday - Leyland Warriors v Chorley. Felt like I was flying around the pitch and certainly fit enough for the level. On the other hand, my decision making is all over the place. Felt really rusty and out of sorts with scrummaging, and considering this was between two first XVs - a little too naive with letting certain things go.

Trip down to Devon on Saturday, followed by a Bank Holiday weekend away with the wife in Dartmouth. 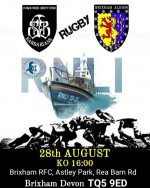 Still recovering from a groin problem, hopefully ok for 11th. If anyone is vising Cumbria in these staycation times, I'm sure our appointments man would love to hear from you! we are desperately short of refs.
Z

ctrainor said:
Still recovering from a groin problem, hopefully ok for 11th. If anyone is vising Cumbria in these staycation times, I'm sure our appointments man would love to hear from you! we are desperately short of refs.
Click to expand...

I’ll be nearby 10th and 17th October is you’re appts guy want to look me up.
A

ctrainor said:
Still recovering from a groin problem, hopefully ok for 11th. If anyone is vising Cumbria in these staycation times, I'm sure our appointments man would love to hear from you! we are desperately short of refs.
Click to expand...

My Soc seems to have more than we need ATM. I've not retired from playing yet and I know there's at least 5 refs (inc me), not allocated to a match this weekend at all. I'm wondering of there's any societies near your area that have a surplus that you guy's could strike up coop with?

This weekend (as a 42 year old) I will be pulling the green and gold of Abroath RFC in our home season opener.

Our season doesn't start until October. So I shall be mainly on the sofa watching NRL. There will be an over/under on the number of times that Latrell Mitchell's hit gets mentioned

SimonSmith said:
Our season doesn't start until October. So I shall be mainly on the sofa watching NRL. There will be an over/under on the number of times that Latrell Mitchell's hit gets mentioned
Click to expand...

at least you're not getting hammered with Toby Green stuff ... or are you?

Dickie E said:
at least you're not getting hammered with Toby Green stuff ... or are you?
Click to expand...

I only watch proper footie.

SimonSmith said:
I only watch proper footie.
Click to expand...

With a number of star kiwi players on "baby watch" (must have been a good New Year's Eve party) do you rate Oz for a win tomorrow?

On balance, no. I think the only reason they close the points they did in the previous games was because NZ took their foot off the pedal, and Australia just decided to go for it and shake off structure a little.

I can't see them doing that for 80 minutes.

Pair of public schools - Dan Scarborough is Head of Rugby at BGS.

BGS Old Boys include Delius and the Brownlee Brothers (what a great band they were) whilst Ampleforth boasts Laurence Dallaglio & Anthony Gormley of Angel of the North fame as alumni (or former students for those of us who don't live in 2nd century Italy).

So no beer tomorrow although Bradford Salem are just up the road so who knows!

Indeed I get changed in the Brownlee Brothers pavilion and could, if I could swim, take a dip in the Adrian Moorhouse swimming pool. If the fixture were reversed we'd be playing on the Laurence Dallaglio playing field.

Just a 3 mile trek for My first game for 19 months Hawcoat Park V Egremont L8, Looking forward to it.

I reffed BGS 2ndXV once at Sedbergh, great game. Had to yellow card one from each team after 20 minutes as the testosterone kicked in, sorted it out. After the game the masters from each team came to speak to me wanting to know what the offence was and the boys would be reprimanded. Told them I just picked one from each team to calm down some general pushing and shoving, they were just unlucky, which thy accepted.
I then sat with the BGS lad and, surrounded by his mates, said that was one of the worst attempts at a punch I've ever seen, embarrassing. If you're going to throw one, make it count, much to the amusement of his teammates.

West Leeds - nice club, small pitch with barely legal in goals. Made famous when Stuart Lancaster held an England training session at West Park Leeds and half the Rugby Press turned up at West Leeds to find it locked up! :biggrin:

There followed a mad dash across town to bear witness to some Lancaster sagacity.
S

Wonder if someone here could help:

Cambridge RUFC Retweeted
Richie Williams
@RichieWills10
·
5h
Urgent request if anyone could please help. Now looking for a referee for a friendly game tomorrow at @camrufc

Was hoping for a weekend off due to a long Sunday, but thin referee numbers got thinner due to a broken toe.

No game this weekend. Wedding Anniversary.